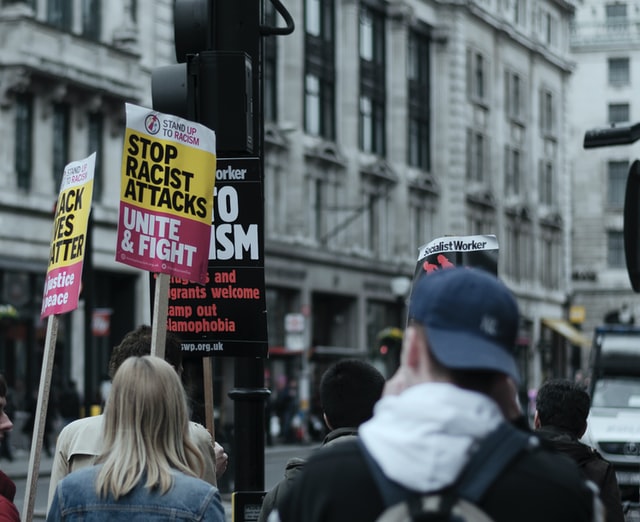 Posted at 15:27h in Pastoral Care, Relationship Tip of the Week, Uncategorized by Bruce Terpstra 1 Comment

At the very foundation of racism is the diminished value of a human life created in the image of God.  You may have heard the phrase repeated recently at protests, “Look at me…I am human.”  When we treat one another in such a way that diminishes what God has declared “in my likeness” we disregard the imago dei.  We sin against man and God.  We create a culture of racism.

God has created all of us in His image.  That value is intrinsic.  What I mean by that is that our value is not based on what we do but rooted in our creator.  Our value is given to us by God Himself.  Psalm 8 tells us that we were created “…a little lower than the angels.”  In contrast, extrinsic value is value based on what we do.  What makes racism so terrible is that the very core of who we are is diminished.

Relational Intelligence teaches us that people are motivated by self-worth.  We want to be valued.  Black lives matter.  This is a slogan that has caught on because many black people have had their worth diminished by the way they have been treated.  If you haven’t been followed in a store to make sure you aren’t shop lifting or been pulled over repeatedly by an officer for no specific violation, you might now understand the pain.  You may or may not identify with others who have been killed recently by bad cops seemingly because of the color of their skin.  Many in our society fear for the safety of their children simply because they are of color.  This has little to do with what they do (extrinsic) but more to do with who they are (intrinsic).

It is true that all lives matter – black lives, blue lives, all lives.  We were created with value and we desire it to be recognized by others.  When our worth is diminished it throws us into our conflict sequence.  Before we go into conflict, we care about our own self-worth, the other person’s self-worth, and the problem.  But it doesn’t take long for our care for the other person’s self-worth to go out of focus.  When this happens, we begin to trample of other people.  Our society is escalating in anger and even violence as we forget to value other people as we sort through the sins of our society.

What can we do to address the problem?  Here are several suggestions:

I will leave you with the words of a good friend who gave this spoken word soon after the George Floyd died in the hands of the police.

Yet, the power of them

Said over and over again

Should have been enough

Who were constraining him

That the force they were using

It was cruel and excessive

And they should have backed off

To let him catch his breath

Instead, he now he’s now dead…silent

But we wouldn’t know what happened

Without the video speaking for him

Because, obviously, he can’t speak for himself anymore

And, then comes the attack

Simply because he asked her

To put her dog on a leash

And though SHE came at HIM

She calls the police ON him

Screaming that she’s being threatened BY him

While he calmly films the incident

It was for his own protection

But he shouldn’t have to live that way

Videoing every movement that you make

All because, without it, your life could be at stake

Well, truthfully, even with the video

But one thing is sure to me

Something needs to change because

I’m at the point where, personally

I’m tired of hearing the words…

She worked her shift and came home

Simply sleeping in the bed that was her own

But life goes on as if hers didn’t matter BECAUSE…

We’re told to “Wait for all of the facts.”

I don’t know much

But what I do know is this

While we “wait for the facts”

I am now wrestling inside

Because, wherever I go

Ready to video my surroundings

So that, from beginning to end

The evidence will not be questioned

However, I see no other way

That I can make it today

Or my beautiful Black daughters and sons

Or my grandbabies that are yet to come

In this day and age

I shouldn’t have worry or dismay

Over whether or not they’ll make it home safely

Or if, even with video evidence, they’ll be believed

But this is reality in the nation in which we live

And, I’m at the point where I say almost daily

You are the Only One who can bring true justice

But until You return

Move Your Church to reject this

Move Your people speak out against this violence

Without questioning or putting the VICTIMS on trial

We must face, without hesitation

That injustice is imbedded in the core of this nation

And Your Church can’t stay silent about racism and discrimination

May we rise up and say, “We will tolerate it no more.”

May this make us sick to our very core

And, I beg of you, People of God, speak up now

For, it’s just too much and I no longer know how

I can explain, yet again, why we must begin

To do justice, love mercy, and walk humbly with Him

So Church, HELP ME BREATHE

Reject injustice at its very core

Brothers and sisters, HELP ME BREATHE

People of God, HELP ME BREATHE

Root out injustice at its core

Let that which God abhors

Be abhorred by you and me

Until the day we all stand free

And see the Imago Dei in all humanity

Then, and only then

Will we put a stop to the craziness

That fuels racism and injustice

But, until then, I’ll pray for you

And you pray for me because, right now…